How Much Further Will US Rates Rise?

US Treasury yields have surged recently, buoyed by rising optimism about economic growth and rising inflation expectations. Based on our growth forecast, longer-term rates will likely rise for the next few quarters—but more slowly. And we think the Fed is prepared to push in the other direction if rates rise too far, too fast.

In past US economic cycles, the slope of the yield curve—as measured by the difference between the two-year and 10-year US Treasury yields—has steepened sharply during and in the wake of recessions (Display). Past experience suggests that 2.5% is the upper limit on the yield curve’s slope; it has been higher at times but rarely for long. 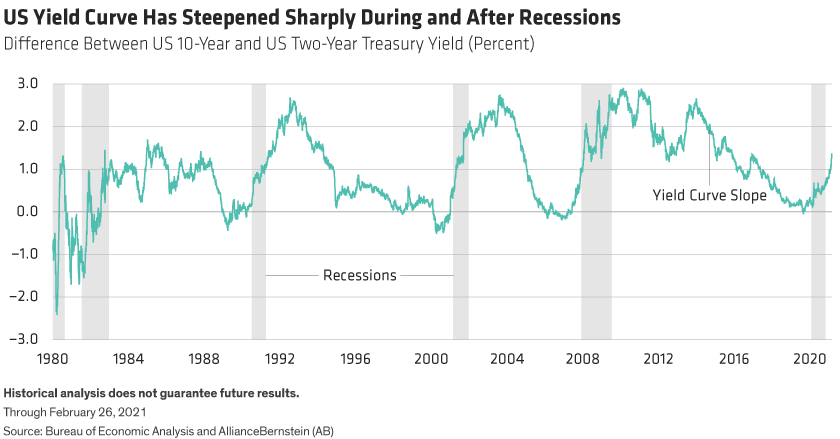 All else being equal, we’d expect 10-year Treasury yields to reach 2.75% over the next 18 months—based on the math of a 0.25% two-year Treasury yield plus a 2.5% yield-curve slope. But we don’t think all else is equal in the current environment.

The Fed Will Be Pushing Against Rising Rates

The Fed plans to buy almost US$1 trillion of bonds in 2021 and is unlikely to allow the bond market to price in near-term official rate hikes. In our view, both factors will limit how far US Treasury yields can rise. As a ballpark estimate, the Fed’s intentions might be enough to keep 10-year yields 50 basis points below where they would otherwise be.

Those inputs are translating into 2.25% as the mid-range of our 10-year yield forecast for 2022; for the rest of this year, we expect a range of 1.5% to 2.0%. But it’s not likely to get there all at once. As rates move higher over the course of 2021, we expect a more gradual pace than we’ve seen in the last few days. Rate selloffs tend to be step functions: a rapid move higher, followed by a period of consolidation, then another step up. We expect this to be the pattern over the remainder of the year.

While forecast risks are tilted to the upside—given the market’s eagerness to price in higher inflation—we think the underlying logic is still sound. We don’t expect the Fed to be as sanguine about rates moving higher from this point as it has been so far, especially if rates continue to move this quickly.

Rates Seem Nearly Caught Up with the Economic Outlook

As the US economy starts to regain its “normal” footing, we can begin applying the typical tools to glean insight into what type of economic outcome is reflected in interest rates. Using changes in the composite Purchasing Managers’ Index (PMI) as a benchmark of economic activity, it seems fair to say that the recent rate increase has just about caught up to the economic outlook.

If 10-year US Treasuries stay at current yields, they’ll have climbed nearly 1% in a year. That’s consistent historically with a PMI in the high 50s, well above the threshold of 50 that demarcates economic expansion. In gross domestic product (GDP) terms, we think this works out to 2021 growth of about 5%. Our GDP forecast is 6.5%, which contributes to our expectation that rates have more room to rise but aren’t as dramatically low relative to the economic outlook as they were 50 basis points ago.

Of course, it’s also important to monitor the nature of rising yields: Are they rising because growth expectations are being marked higher? Or are they climbing because the market expects the Fed to hike short-term interest rates? The implications of the answers emphasize why investors also need to remain mindful of the shape of the yield curve—not just the level of rates.

Eric Winograd is a Senior Economist at AllianceBernstein (AB).

The views expressed herein do not constitute research, investment advice or trade recommendations and do not necessarily represent the views of all AB portfolio-management teams. Views are subject to change over time.

Transform How You Think About Money for Greater Success

Developing a better money mindset is a great way to set yourself up for success in life. When it comes to finances, having the right

How to Make Unemployment or Underemployment Work for You

So, you’ve been laid off or your hours have been cut short. What should your next move be? Here are four ways to be proactive